#26045  by MattG
Mon May 16, 2022 11:47 pm
To celebrate the 20th anniversary of the release of Star Wars: Attack of the Clones, we finished up a recover-and-restore project on this Outlander Club bar set piece and moved it from the workshop into our display room. It is from the scene where Obi-Wan Kenobi turns down the offer of death sticks, and defeats Zam Wesell's ambush attempt. This was a large set component that was rescued from the junk pile when the Outlander Club set was broken down after filming in Sydney for Episode 2. We cleaned it up, re-attached some components that had become detached, and build a new support base to keep it off the ground and to bring it up to the correct display height (everything above the metal foot bar is original, except for the internal lighting, which has also been replaced... and will probably get upgraded to something better in the near future). 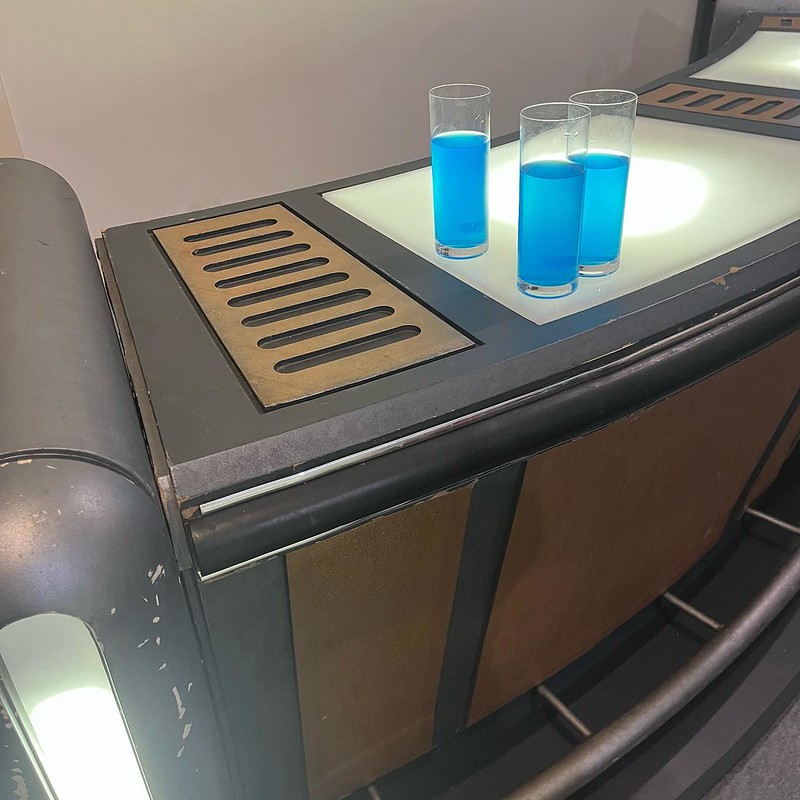 #26047  by MattG
Tue May 17, 2022 9:23 pm
A couple of wider shots. Have got plans to fill the space behind the bar, including some other, related, screen-used Star Wars set pieces, but that'll take a bit more work (the yellow Outlander Club sign is just a quick placeholder)

#26048  by cloneone44
Tue May 17, 2022 11:55 pm
That's an impressive piece, especially screen-used. It will look absolutely stunning with some background to it (and a couple of drunk aliens leaning on the bar). The blue drinks make it real!

Also - and forgive me for going off-topic - but I was looking through the Flickr albums and found a presence of an Imperial Officer...a presence I'd not felt since.... Awesome 2005 flashback - yes, that's Kristy and me, with the Death Star backdrop we built.
Matt G
My Trade/Want List

#26051  by MattG
Sun May 22, 2022 8:02 am
Digging through some old behind-the-scenes for more reference pics... this one of the Outlander Club bar is from Star Wars Mythmaking: Behind the Scenes of Attack of the Clones.

This Outlander Club set took a couple of months to build, was used for filming for less than a full day, then demolished (mostly) in order for another set to be built in the studio the next day.

That's so cool! Belated "Nice to meet you both"!!
Zac in Whanganui

Plus text version on our blog: https://www.villavarykino.com/screen-us ... set-piece/
Matt G
My Trade/Want List