It all started when I met my new neighbour Postie and he mentioned the insane price of a metal R2. I join the astromech forums to grab plans to make a half size one out foamcore and cardboard for my daughters. While on the site I discovered the cheaper option of styrene, and the rest is a bit of a dent in the wallet.
The prototype. I learnt a lot about the plans from doing a half scale version (then threw in a couple of LEDs to make a night light) 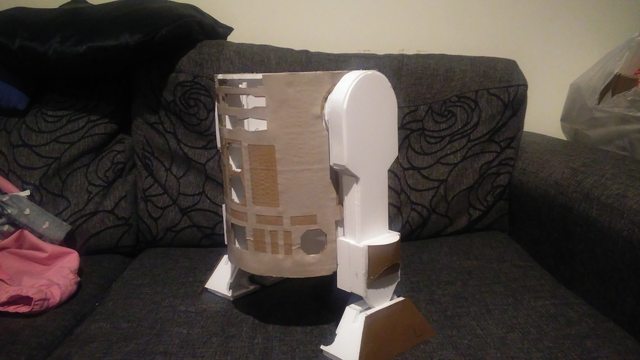 I didn't take pictures for the body frame build, but started again around the first skin layer (not having opening panels to keep this simple, well, simpler). This really locks in the seemingly fragile and wiggle frame. This was also my biggest failure of the build which means, darn it, I'm going to have to build another one! And then when adding the outer rear skin, I discovered the rear inner skin plan was a mirror which means my octagon port is on the wrong side. To get that off would be really difficult due to how it bonds so I just went with it. Only a few will notice *cough*

Shoulder hubs were next, then I took a break for a week to get feeling back in my left thumb and also bought a dremel. All the tools so far were knife, ruler and a piece of plastic with two screws in for creating circles. Lots of bending and snapping took a toll so a power tool was acquired.
Legs after, here they were half built showing the structure inside. Central metal rail for cables that come through shoulders, into the leg and down to feet motors. This moment was nerve wracking, hubs, legs, on to the body. Did I get the 36deg angle? Damn right I did. There was a jig danced. I'm going three leg (I unscrew and reset the legs for 2 leg mode and storage) so three ankles and another milestone. I rushed home from work with some bolts to fix it, eschewed dinner and got him in position for the first time. Both my daughters jumped down and gave him a hug. Three feet later I needed to do some solid cutting into the top of the center foot to get it to lay down flat. Next the shoulder hubs went on, and I built the arm carrier boxes. I'm now putting together the booster covers for the two legs and finishing up the main parts of the center foot.
I found the right caster at bunnings -finally- (75mm w/ bolt hole) so I expanded the hole in the base to let it swivel free and now I'm putting the skirts on. Todo:
So many many things.

#23413  by oota goota
Wed Dec 07, 2016 5:54 am
really nice looking quiet great build! It must be satisfyinIg to see the beast take shape. Fortunately SWNZ has a few r2 builders here I'm sure they will watch your build with interest

#23426  by MattG
Thu Dec 08, 2016 4:46 am
R2's coming along nicely! Impressed with your handling of all the styrene component builds. I used a few styrene pieces on my 1:1 R2, but I admire your patience and precision the way your building yours up.

PS: if you're near Colin, are you on the Shore?
Matt G
My Trade/Want List

#23427  by quiet
Thu Dec 08, 2016 5:08 am
Thanks all. Yeah, styrene has been a learning experience (the biggest lesson was knowing when to stop before slicing my fingers. All R2's need a blood sacrifice). People suggest making a dome first but I would have totally messed up cutting a dome without learning how styrene works with the melting, bonding, snapping and scoring.

I just found out the NZ manufacturer of HIPS has stopped producing it (Cambrian and IPSNZ both say Diffuser has stopped making it since the company was sold, but maybe more stock in Jan 2017). I've got the biggest parts out the way so my leftovers will be fine.


MattG wrote:PS: if you're near Colin, are you on the Shore?

I am yup, Colin is my neighbour

I've also seen yours and Bazz(?)'s builds on the astromech forums, they're great.

#23431  by quiet
Thu Dec 08, 2016 10:42 am
Tonight I cut and added some of the final top skins to one booster, filed and added initial skins to the second. Small boxes created for the curve. Then everything taped up to set overnight. Centre foot has it's skirts going on and taped as well. The build is based on a combination of Dave Everett's CS:L styrene plans and Ziz's parts (he does CS:R so I have to check to make sure sizes are right). I'm slowly collecting bits and pieces that match sizes for scratch building greeblies as well. A newish hobby store near work (Constellation Hobbies on Unsworth) has been excellent since they stock evergreen styrene tubes and such.

#23465  by quiet
Wed Dec 14, 2016 9:03 am
I am tired of sanding things!
Finished the booster covers and then I applied putty to every non-structural gap and slip of knife and overrun of glue I could find on the legs, covers, main ankles and all three feet. Then I sanded every piece with two different grits. I'm still skinning the centre ankle so that will need the treatment also. And then multiple sandings during painting. Sanding

If you look carefully at the centre foot in the image (at the back) you can also see where I had to shave down the top of one side to allow the ankle to sit at the correct angle. A known problem with some styrene builds where all those 0.5mm errors in measure/cuts compound. Not 100% happy with that foot but it'll do for now. 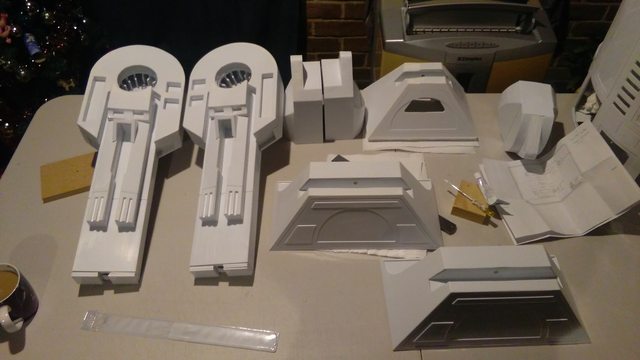 Building an Astromech is on my list of 'One Day' projects after all the others have been done.
Could you tell me whereabouts you got the plans from? Maybe getting some of my own will make me get into it

#23516  by badges2nz
Sat Dec 17, 2016 7:06 am
Nice work and patience on this build, looking forward to seeing your progress on this one.
Doomsday and Armageddon got together and had a baby and man is it ugly.